Brussels Museums is the independent federation of Brussels museums, representing more than 120 Brussels museums and art centres. It is the driving force behind “Museum Night Fever” and “Les Nocturnes”, which are key events in the cultural life of Brussels.

“During Museum Night Fever, we put museums in touch with young artists or socio-cultural associations, who together decide on the programme. This makes it possible to diversify the audience for an event. The question then arose as to how to structurally and sustainably establish a way of thinking and working in the museum sector that is also participatory, co-creative and representative of diversity. From this, the “Open Museum” project was born in 2020. Gladys Vercammen-Grandjean, project coordinator, tells us.

“This question came from the museums themselves, who wanted to be supported on the increasingly present issues of diversity and inclusion. As a federation, we wanted to respond to the concerns of our members and address these issues.” says Gladys.

To this end, several actions have been implemented.

“It is not simply a question of attracting a diverse range of visitors to museums, but rather of preparing the premises to receive them in the first place.” Gladys points out.

This preparation requires introspection and a necessary questioning of its certainties. Museums mistakenly believe they are neutral and objective places. Open Museum breaks the myth of neutrality and invites museums to stop ignoring historically under-represented voices in the sector. And, according to Gladys, this is a strong signal sent by Brussels Museums: “We dared to take a stand as a federation!” she tells us.

In practice, this awareness-raising led to a study day on the theme “Rethinking museums as safe spaces”, inviting everyone to deconstruct their frame of reference and to share and discover good practices for making museums more inclusive and participatory places.

Practice what you preach !

“We are not going to explain to museums how to manage their diversity policy if we ourselves do not set an example,” says Gladys In 2020, the association joined the working group on diversity management and inclusion in the Brussels cultural sector led by BRUXEO in order to initiate a collective reflection on these issues. During this process, Brussels Museums concluded a diversity mini-plan with Actiris, as well as a sectoral agreement aimed at raising awareness on diversity and inclusion in museums.

As part of this sectoral agreement, Brussels Museums is setting up a think tank of diversity experts who do not work in museums but who have a critical external view of museum practices. “Bringing in external experts was already countering the idea that museums, as temples of knowledge, already have all the necessary expertise in-house. They are vulnerable and must admit that they don’t know everything!” Gladys points out. 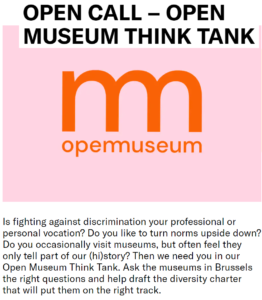 The call for tenders was already an example of good practice!

The mission of this think tank is to identify the various barriers to inclusion in museums in 5 areas (the 5 P’s: programme, partner, public, place (physical and digital space), people). The museums then consider how to overcome these obstacles, which they may not have been aware of. The result of this drivers/impediments exercise is a list of specific recommendations that museums can adjust to their own context.

Diversity and inclusion are appealing topics… on the surface

“We like to talk about inclusion and diversity, it’s a warm and human message. But as soon as it affects your own privileges or if you feel that you are giving up a piece of the pie, the friction starts…” says Gladys.

To implement a diversity and inclusion policy in a sustainable way, the groundwork must be done. Indeed, bringing new voices into a system requires preparing said system to accommodate these voices. According to Gladys: “Each party can learn from the other. However, it is important to avoid one taking over the other and thus to maintain the power dynamics.”

Open Museum, “a success in progress”

“The work of inclusion and diversity can never be considered completely finished. Thinking otherwise can be dangerous,” warns Gladys.

On the other hand, the impact of actions is not necessarily immediate. “This is work that is being done for future generations, just as previous generations have done this work so that we can enjoy our current freedoms,” Gladys says.

« Everything you do about us, without us, is against us »

Nor should we lose sight of the popular pressure which, if it is already expressed very forcefully in the Anglo-Saxon countries, is gaining ground in Belgium. Indeed, institutions are increasingly being singled out when they remain impervious to diversity and inclusion issues. It is, for example, increasingly unacceptable to the public for museums to display collections about communities without involving the communities concerned.